Deep in the village with the King of Lango

Posted on January 4, 2017 by Aleksandra Lukasiewicz

A few weeks ago, I was fortunate enough to attend an official clan leader inauguration ceremony for Omolo Atar Odyakol clan in Ogedi village, Kole District. A friend and I were picked up in the morning to make our way deep into the village. After about an hour of dodging potholes on dirt roads we arrived at the venue. There were more than a thousand people gathered for the event coming from all corners of the district. I knew then that this was going to be special. 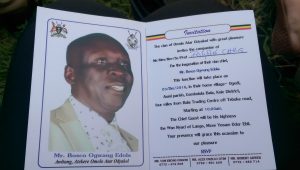 the invitation to the inauguration 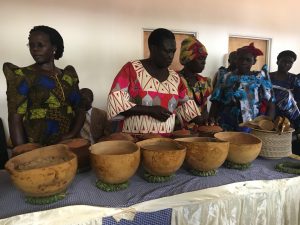 We were ushered to our seats among some pretty important people – district commissioners, ministers and members of parliament. Entertainment began right away with lively music and dancing and shortly after the King and Prime Minister of Lango arrived for the ceremony! Upon their arrival, each of them said a few words and welcomed all the guests. They and a select few guests, my friend and I included, were escorted into a side room to have a traditional lunch. The clanswomen had prepared a feast of various dishes typical to the region. I was excited to be able to try it all, and in the company of a king nonetheless. Several official photos were taken and the king said a prayer, after which the clanswoman began serving the many aromatic dishes. 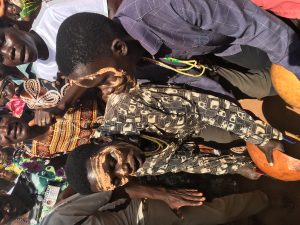 Lunch lasted for about an hour and then we went back outside to continue the ceremony. At this point there was a group of traditionally dressed villagers performing an animated dance to energetic music. The audience was participating enthusiastically. After the performance the official inauguration ceremony began, which inc
luded different customary practices and rituals. First, the man being inaugurated was outfitted in cheetah skins and war paint was applied. He then had to try his hand at a traditional shoe flip – which the king explained would indicate his ruling style. After that, there was a ceremonial spear fight, with the new clan leader and clansmen acting out different movements of fighting styles from their clans’ primitive beginnings. 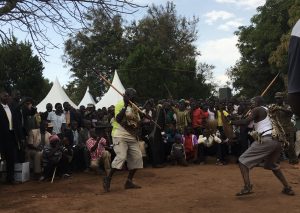 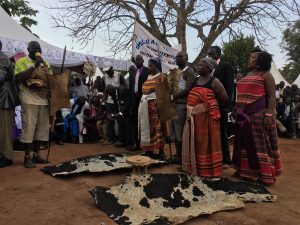 clan leader and his wives before being oiled

The king then performed a series of official acts to initiate the man, he and his wives – yes plural, polygamy is prevalent here – were seated on dried out cowhides and almost entirely disrobed, while members of the clan and then the other guests came to smear their bodies with some sort of oil. My friend and I were encouraged to participate, and when we did, everyone in attendance thought it was the funniest thing. After about 10 minutes they were completely covered in oil and the king announced that they were now ready for the robing ceremony. They were led off to wash off all the oil and when they returned the final stages of initiation were completed. He was outfitted in his new clan leader robes and presented to his clan. He gave a speech outlining what he intended to do for the clan, placing huge emphasis on the need for capacity building. Each member showed their acceptance with an embrace, and the music of celebration began again. 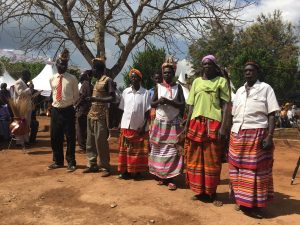 I was so lucky to have been able to participate in this inauguration and see firsthand the events of such a ceremony. Throughout the event, during the many dances and cultural performances, the sensory adventure of local food and music, I found I had to remind myself to take pictures as I was constantly left in awe of the experience. It’s an experience I will cherish.