“Out of Many, One People”: The Chinese Jamaican Story

Happy Chinese New Year! Saturday, January 28th, 2017 is marked as the New Year by the lunisolar Chinese calendar otherwise known as the Spring Festival. It is the Year of the Rooster for those who are born in 2017, 2005, 1993, 1981, 1969. I am actually a Rooster meaning it is my lunar year! Chinese New Year is a huge celebration in my household- more important than the New Year we celebrate as January 1st. It is a time for families to be together, wherever we are. My family and I would have a “reunion dinner” where my mother and I would cook a number of dishes that hold special meaning for good luck, wealth and so on. This year is very different for my family because I am in Jamaica and my parents are in Taiwan. It is the first year that I can remember where we are not celebrating together as a family. Although we are miles apart, technology today is able to allow us to skype each other for well wishes and greetings. 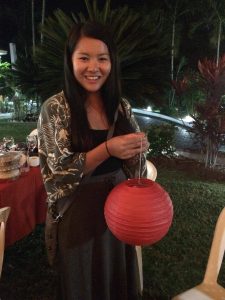 Being Taiwanese-Canadian, I hold my culture strongly in my life and I find that being away for the holidays is the hardest part about the internship. I remember feeling very homesick for Thanksgiving and knew that Chinese New Year would be a difficult time for me. Although there is a large population of Chinese-Jamaicans, I struggle with finding products that I know how to cook with or restaurants that are within my budget- (I eat a variety of foods but growing up, my mother’s cooking is influenced by our Taiwanese background thus my typical lunch would consist of rice with, five-spiced chicken, bok choy, etc.). I have met a couple Chinese-Jamaican families while I have been here and they have kindly brought me to a few celebrations that were happening within the community here. I attended a food celebration at a local restaurant, participated in my friend’s family celebration (a fellow IYIP intern under the Atlantic Council for International Cooperation) and attended a red carpet premiere for a documentary showing about Chinese-Jamaicans. 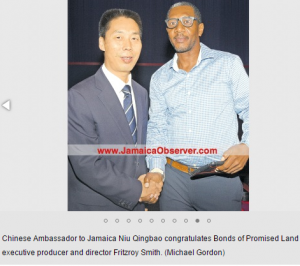 The documentary showing stood out to me because I was able to learn a different side of Jamaican history- about Chinese-Jamaicans. It was called “The Bonds of Promised Land” by executive director Fritzoy Smith and you can watch an early promo on YouTube- https://www.youtube.com/watch?v=EMOrTZ-cHPc . Being of Asian descent, many assume I am Chinese-Jamaican which has brought an interesting perspective towards my internship experience. I am called “Ms. Chin” or “Chiney Girl” on the streets which in Canada, it would be consider racism but here- it is actually what they call all Asian-descent individuals. The Chinese-Jamaican community are always wondering who I am with curious eyes watching me from the cars and shops while I walk to work or trying to figure out who my grandparents as they are a tight-knit community where everyone knows everyone. I have encountered locals who do not believe I am Canadian or are fascinated with the fact that I walk around and take local transportation. There have also been times where individuals bluntly tell me “your people are taking over Jamaica” or charge me significantly higher prices because they think I am wealthy. There are simply two views of the Chinese-Jamaicans here: one that sees economic growth while the other sees money-making machines.

Watching the documentary reminded me of the similarities of the struggles that my parents faced when they immigrated to Canada 30 years ago of racism, hardship and assimilation. In Jamaica, the Chinese (otherwise known as the Hakka descendent) started to arrive on July 30th, 1854 after slavery was abolished to work in the plantations. There was a sudden large wave of immigrants arriving which created restrictions on Chinese migrants with immigration costs around the 1900s.

One of the first waves of Hakka immigrants

The Chinese-Jamaicans found themselves in the market of grocery stores – so common that locals are always asking me when am I opening up my shop. However; there was wave of inter-ethnic violence against them in the 1970s when produce became expensive causing many to immigrate to Canada or the United States. In the documentary, one patron explained during the time of the violence, a group of elders went to the Chinese Consulate to discuss what security measures could be given. The Chinese Consulate explained that they could not help them because they were Jamaican, not Chinese. It was the first time that the Chinese-Jamaicans realized that they were indeed Jamaican. They were integrating themselves into the Jamaican lifestyle; having a harder time connecting with their Asian culture (with the language, food, etc.). This is part of what many of Asian-descent generations around the world struggle with today- their cultural identity. 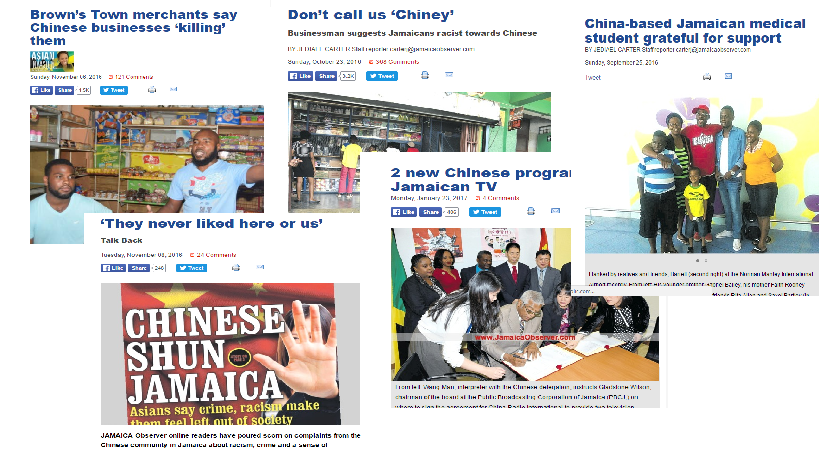 Although there is a division between Chinese-Jamaicans and Jamaicans, many still live in Jamaica. More and more you see inter-racial marriages as it was common for a Chinese-Jamaican man to have a wife in China and a wife in Jamaica back in the days. Many locals will tell you they have some Asian blood somewhere in their family line. The Chinese-Jamaicans have also played a large effect towards the Jamaican culture as a result of their importation activities; they sold rice, saltfish, saltmeats, flour and cornmeal which are staples of the Jamaican diet. They also played an integral role towards the music industry with notable individuals like Vincent Randy Chin who started the world’s largest independent label and distributor of Caribbean music through his VP Records Empire or Leslie Kong who ran Beverley’s and recorded notable artists such as Jimmy Cliff and Bob Marley’s first single “One Cup of Coffee”. The hope of these stories is to raise positive awareness about the Chinese community in Jamaica and continue the country’s motto of “Out of Many, One People”.

Ps. On a side note: another random thing is that locals love saying “Konichiwa!” to all Asian descent individuals which means “Hello” in Japanese.

One Response to “Out of Many, One People”: The Chinese Jamaican Story