I have been living with a very friendly household here in Zambia. Mayo, and her nieces all sing, in the bath and while at work. I thankfully take up the opportunity to add my voice to the choir, as I also love to sing! During my first week with Mayo, I was shocked to find out how much she resembled a North American soccer mom. She drives an over-sized minivan listening to the hippest English Christian music, she bakes, she goes to the salon to get her hair done every month, and she has a large network of girlfriends. There are a few things that set her apart though – she wears the traditional stenge, likes to eat inshima and fried caterpillars (a popular treat here), and watches the popular Nigerian movies that are largely about witchcraft and family feud. 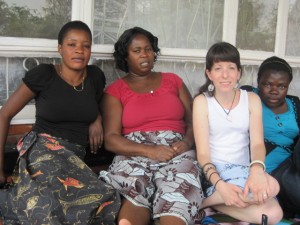 Just a few weeks after knowing each other, Mayo had some pretty hot and pressing questions to ask. She asked me if I lived with my family at home. I told her I lived with my fiance, and here in Zambia this is a burning debate, as ‘co-habiting’ is quite controversial. With a big assertive HUMm, Her next question was whether we slept in the same bed. When I answered yes, her next question was whether we had gone for our Voluntary Counseling and Testing – a mainstay component of HIV and AIDS prevention and treatment programs. This program is often promoted to ‘free your mind’ – know your status. When I replied ‘no, because we use condoms each time’ her response was ‘you trust a piece of plastic?’ And my answer was ‘yes, because it works’! And just when you think a conversation can’t get any deeper, Mayo asked me what I would do if another women came in between our relationship….

As you can imagine, this opened up another door to discuss other aspects of the spread of HIV and AIDS. We began to discuss the nature of the epidemic in the Zambian/ Southern African context as compared with the mostly population-specific disease in the Canadian/North American context. There are many key differences in the modes of transmission of HIV and AIDS in North America and in Southern Africa and how the disease spreads, largely based on the culture of relationships and how they are understood. Condom use in North America is nearly universal, whereas it has yet to be a consistent practice in Southern Africa. There is also quite a bit of misinformation and some harmful traditional practices that contribute to the spread of the virus, as well as inter-generational sex, which has a disproportionate impact on young women. Many organizations here are keen to address these drivers of the spread of HIV and AIDS.

I feel fortunate to be able to exercise my right to decide when, how, with whom, and with how many people I have sex with. I get to have a say in how I want to be protected. Recently I had a conversation with a young women who really felt that women needed to know more about how to use the female condom, and where to get one. While I agree that this is a good idea, I feel that a truly empowered women will at least have the choice and ability to avail the best protective option available to her, and comparatively, this is still the male condom.

At any rate, I am learning about the complexity of the HIV and AIDS epidemic here. There is no one magic bullet that can stop the spread of HIV and AIDS, not even the male condom in all its greatness. Gender and the relationship between women and men (combined with other cross-cutting issues and identities) cannot be taken for granted, and has been and will continue to be an important factor in shaping the AIDS epidemic.

This entry was posted in Zambia and tagged Gender Equality, HIV and AIDS, Prevention, Zambia. Bookmark the permalink.

2 Responses to Mayo and Condomly Chit-chat