Apologies for being blogolate – I hope you enjoy this blog about World AIDS Day.

The Friday before World AIDS Day, I attended the last organizational meeting for the event, that was attended by a healthy mix of various government officials, civil society and the private sector. There were representative from the local police service, immigration, education, the Council for Persons with Disabilities, the District Health Team, the Mopani Mines company, and the handful of local HIV and AIDS NGO’s. As the meeting progressed, it was clear that the preparations for World AIDS day, and who was going to do what, when, and with who’s money and for how much, had not been entirely ironed out. The man in charge was direct in asking those that had made earlier pledges, – where’s the money, and when will we see it? I was skeptical. Nevertheless, although the start to World AIDS day was fashionably late, it was a success, and I was quite impressed by the turnout, enthusiasm and energy.

When myself and two colleagues arrived, there was a percussion marching band and a group of cheerleaders warming up. There were the boy scouts and groups sporting t-shirts with all sorts of positive slogans advocating for the rights of people affected by and living with HIV and AIDS. As the march progressed, the parade grew with cumulating numbers of children dancing or marching along with the band, and young girls practicing their own baton throwing with wooden sticks, following the lead of the cheerleaders. We passed out countless packets of free condoms, which many of the young men we passed by were eager to take. Unfortunately, I don’t think any of the women we passed by took us up on the offer. The Mopani Mines group was by far the most boisterous of us – singing, chanting, and dancing the entire time, with a few sporting blown-up condoms. Once the parade reached its destination at the stadium, the schedule for the cheerleaders and the marching band was demanding, but they put on a good show each time they performed…before the speeches, after the speeches, before short skits, and during the breaks in the soccer tournament. The stadium also had a Free Voluntary Testing and Counseling tent, and a table displaying ART drugs.

I definitely had a lot of fun at the event, but for many here, World AIDS Day is heavy with the thoughts of the close family members and friends they’ve lost to the virus. I think for me the message that struck me the most today was the one I heard on a television program discussing HIV and AIDS in the US and some African countries that I hope sexually active youth everywhere will embrace –“ love yourself enough to protect yourself” – you’re worth it! 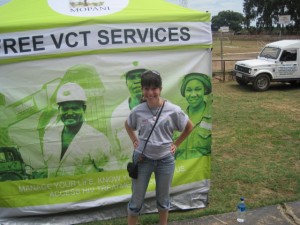 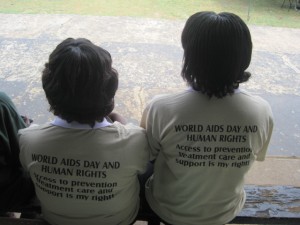 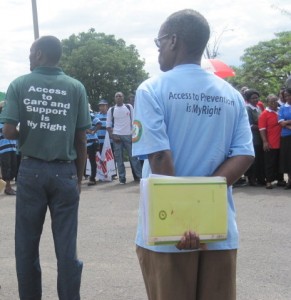 This entry was posted in Zambia and tagged Condoms, HIV and AIDS, World AIDS Day. Bookmark the permalink.