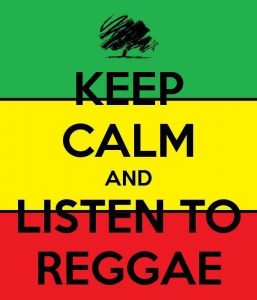 What better way to close off our last month in the internship by celebrating Reggae Month! For the entire month of February, the Government of Jamaica announced in 2008 that it was to be a celebration of Jamaica’s reggae music. This was done to highlight and celebrate the impact of the musical genre on the country’s social, cultural and economic development. Additionally, two of the late icons of Reggae Music: Robert Nesta Bob Marley and Dennis Brown celebrate their birthdays on February 6th and February 1st. The entire month is filled with activities such as live weekly concerts, lectures, an awards ceremony and so much more; organized by the Jamaica Reggae Industry Association (JaRIA).

The origins of reggae were first developed in Jamaica from the late 1960s and denote a particular music style branching off from genres like Ska and Rocksteady. It is said the word reggae comes from a Spanish term for “the King’s music” and was derived from a 1968 single by Toots and the Maytals “Do the Reggay”, described as a rhythm style close to the New Orleans’ blues. However; as the genre progressed, it became a lament-like style of chanting and emphasizing the syncopated beat. It has grown to have a relationship with the underworld of “Rastafarians” both in lyrics and drumming style.

Rastafarianism is a religion with deep political convictions that is said to have begun in the slums of Jamaica in the 1920s-1930s. It is deeply influenced by African religious traditions along with biblical themes. There is no formal, organized leadership in Rastafarianism thus creating a wide variety of spiritual and moral variation within the religion. Some see Rasta as a way of life while others see it is a religion. The unity of the movement is the belief in the divinity and/or messiahship of Ethiopian Emperor Haile Selassie I, the influence of Jamaican culture, resistance of oppression, and pride in African heritage. Marcus Garvey is considered to be a founder of the religion and symbols include: 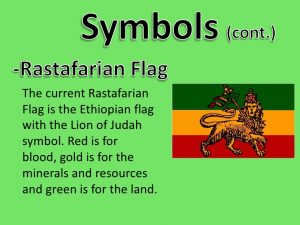 Rastafarians believe in the Judeo-Christian Gold whom they call Jah. The belief system is described to be based in Judaism and Christianity, with an emphasis on the Old Testament laws and prophecies and the Book of Revelation. Rastafarians do not believe in an afterlife and trusts in a concept of the oneness between humanity and God as well as the equality of all humans. The signature long, natty dreads on the heads of Rastafarians and chanting down Babylon with the help of reggae music has made Rastafari a highly visible movement and is said to be one of the most powerful cultural forces among youths in Jamaica. The most famous Rastafari is arguably Bob Marley, whose reggae music gained international recognition.

Many venues that I enjoy hanging out for live music include Dub Club, Red Bones Café, and “Jamming at the Springs”. The music that is sung or played is commonly or influenced by reggae music. On February 1st, Juanita (my fellow roommate/intern) and I stopped by Mandela Park in Halfway Tree which is named in honour of Nelson Mandela’s public visit in Jamaica. It was the first day of reggae month and also Dennis Emmanual Brown’s birthday. Dennis Brown is said to be the Crown Prince of Reggae releasing over 84 studio albums, seven live productions and countless singles over his 30 year career. His international hits include Money In My Pocket , Baby Don’t Do It, and Black Magic Woman. His success has proven to be influential on future generations of reggae. What I enjoyed about this particular concert was the atmosphere of the audience. Music is highly valued in Jamaica and individuals are jumping up and down, swaying their hips to the beat and singing along. Simply to put it- everyone is there for a good time.

Later in the week, on February 5th, we attended another concert that was held at Halfway 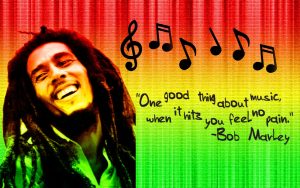 Tree Transport Centre- “Redemption Live”.  It was a celebration to honour the life and works of Reggae legend of Bob Marley in the heart of the city. There was a huge audience in attendance with notable artists performing such as Jay Prince, Ricky Chaplin, Ikaya, Devin Di Dakta, Jah 9, Kabaka Pyramid, Kymani Marley, Richie Spice, Capleton and Beenie Man. On Monday, February 6th, we stopped by the Bob Marley Museum on Hope Road, close to our apartment as it was Bob Marley’s 72nd Birthday to listen to more reggae music from the roots. Many artists expressed the importance of protecting children, raising awareness about gender-based violence and peace before their performance. The lyrics in the song had messages about activism and equal rights in humanity. Overall- reggae month has proven to be the time of good music and good vibes.

There are events happening almost every day for the whole month and I am excited to continue to explore these venues with my friends. My music playlist is now filled with reggae songs from the concerts. I have learned so much about not only the HIV situation in the Caribbean Region but also the culture of Jamaica which showcases the importance of this internship. It simply isn’t enough to just read about something- but to experience it firsthand will give you a lightened perspective and appreciation towards so much more. For those that are interested, I have attached the calendar below for the events happening in the rest of the month! 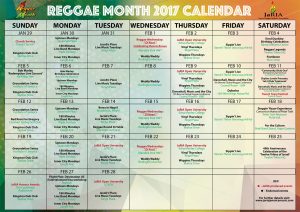