Much Needed Review of the Sexual Offences Act Currently Underway

Posted on February 13, 2017 by Christine Kinoshita

In Jamaica, the Sexual Offences Act of 2009 along with the Offences Against the Person Act of 1864 provide the legislative basis for all crimes of a sexual nature. I remember, quite vividly, reading all about these two pieces of legislation in my first week of work. My research confirmed the existence of what is commonly referred to as the “Buggery Laws” – four articles in the Offences Against the Person Act that make certain “homosexual acts” illegal. See below.

Not long after learning about the Buggery Laws I was tasked with creating a series of infographs (simple graphics with key information that can be easily circulated on social media and used as teaching aids). It was then that I was introduced to the Sexual Offences Act. Although working to overturn the Buggery Laws is important to J-FLAG, they are very vocal about the fact that their programmes address a wide range of issues, all with the purpose of creating a Jamaican society that values and promotes equality for all. Expending too much of their time and resources to contest one issue would inherently devalue the work that the organization does as a whole. By diversifying their programmes, they are able to produce a wider and more profound impact, especially in the areas of human rights, health and social justice. One of the many topics they contest is the unequal protection of all people under the terms of the Sexual Offences Act. 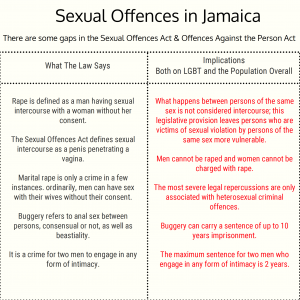 In January 2017, the Jamaican Parliament appointed a Joint Select Committee to review the Sexual Offences Act, along with the Child Care and Protection Act, the Domestic Violence Act and the Offences Against the Person Act. Those who passionately advocate in favour of this review point to its inadequacies in the definition of various terms throughout the Act. Additionally, advocates indicate that different forms of sexual violence are organized hierarchically, with heterosexual acts carrying the most severe penalties, while many acts of sexual violence carry minimal sentences, are not criminalized or are entirely ignored. To provide an overview of the Sexual Offences Act I went straight to the expert himself, my friend and co-worker, J-FLAG’s Policy and Advocacy Manager Glenroy Murray.

Q: How is sexual intercourse defined? What are the implications of this definition, especially with regard to rape?

A: Sexual intercourse is defined as the penis of one person penetrating the vagina of another person. The implication is that the law only recognizes forced vaginal penetration as rape. If a woman is forcibly penetrated in her anus or mouth, the law does not consider it rape. This also impacts statutory rape which is similarly limited.

Q: Can you identify some of the other major areas of concern in the current Sexual Offences Act? What are your recommendations for changes in these areas?

Q: What role does religion play in shaping the terms of the Sexual Offences Act?

A: Religious extremists have influenced the legislative process in the past, and in some way are responsible for the heterosexist formulation of the law. They do not however represent the large masses of religious persons in Jamaica, who are largely unaware of the letter of the law.

Q: What are the views of the general public? Will the changes that are being proposed likely be received positively or negatively? Is the push to review the Sexual Offences Act mainly coming from civil society, or the general public as well? Who are the major players who reject these changes?

A: The push for changes is largely coming from civil society. However, that is due to the fact that they are more aware of the implication of the law. The general public needs to be sensitized re the issues. The challenge is that religious extremists have a powerful propaganda machinery that will mislead the public and convince them to oppose the amendments. The extremists include the Jamaica Coalition for a Healthy Society (JCHS), Love March Movement (LMM), Lawyers’ Christian Fellowship (LCF) and Jamaica CAUSE.

Q: Is there a reason why the review is happening right now?

A: The review has been legislatively due since 2014: It is to be reviewed every five years. It dropped off in 2014 and finally restarted.

Q: What has to happen for the positive changes to be accepted and implemented?

A: There needs to be clear advocacy and public sensitization that is not hijacked by the extremists for the changes to be accepted. Submissions to the Joint Select Committee and public advocacy should stay away from “foreign imposition” and “gay agenda” narratives.

The staff members at J-FLAG, especially Glenroy Murray, their Policy and Advocacy Manager, have been extremely outspoken about the need for legal and legislative reform in Jamaica. Glenroy is often quoted in news stories and heard advocating for equality on the radio. Jaevion Nelson, J-FLAG’s Director of Projects and Strategy and my work supervisor, publishes a weekly article in the Jamaica Gleaner that in the past has touched on issues pertaining to gender-based violence, violence against women and girls and the education system in Jamaica, among other things. However, it has proved to be a lengthy and exhaustive battle, met with obstacles from opposing groups as well as a powerful public consciousness that exists throughout the island that is trapped within a set of intolerant and discriminatory values. J-FLAG’s programmes team is working to change that, employing a type of dualistic approach to advocacy whereby they engage both the government and the public. Their approach to advocacy has seen positive results and will likely continue to do so. I find myself often admiring the optimism and strength that exists in this organization and I truly believe that it will be their unwavering devotion to bringing about positive change that will ultimately generate groundbreaking outcomes.

To read more on the subject, check out this Letter to the Editor written by Glenroy Murray published in the Jamaica Observer: http://www.jamaicaobserver.com/letters/Some-church-groups–views-on-the-Sexual-Offences-Act-selfish-and-dangerous_88988

Christine was born and raised in Toronto, Ontario. She recently graduated from McGill University in Montreal with a Bachelor of Arts in International Development.

Christine was born and raised in Toronto, Ontario. She recently graduated from McGill University in Montreal with a Bachelor of Arts in International Development.
View all posts by Christine Kinoshita →
This entry was posted in IYIP 2016-2017, Jamaica. Bookmark the permalink.