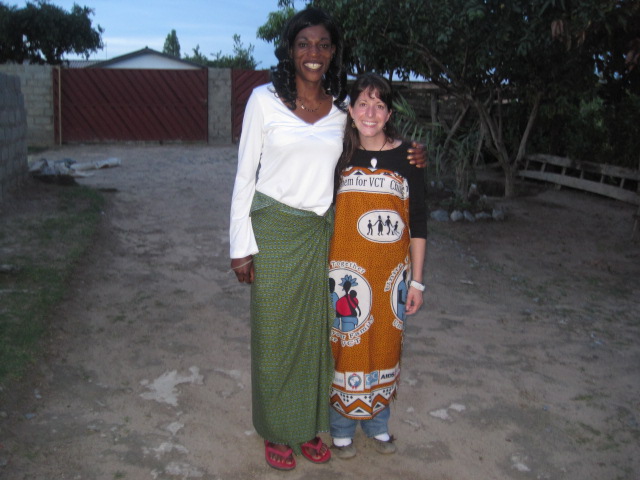 It’s now been a month since I’ve come back from Zambia, and life at home has been quite busy. I got married to my fiancé, and I am just now starting to settle down to look for a new job, training and education opportunities, and to tend to our very unkempt garden.  I am also starting to reflect on my experience in Zambia, and before I close this blog, I definitely want to tell you about a friend I met there named Fridah.

I met Fridah in her brother’s internet café, which was no difficult feat, considering she is possibly the friendliest and most outgoing person in Mufulira. She comes from an incredibly industrious family, and can often be found running around with work, online courses, her own business projects, invites to discuss her experience with HIV and AIDS, and now: starting a new organization. And, in between all of this, she somehow managed to find time to spend with me! She was a source of great support to me as the new musungu (white person/women) in town. The photos here are of Fridah and I at her home the week that I left Mufulira. In a mini despedida (farewell party) inclusive of a sporadic and silly dance-fest, she taught me how to make a meal of inshima and kalembula.  Here is her story, and how HIV has affected her and her community.

Ten years ago, Fridah became very ill with TB (Tuberculosis) coupled with meningitis. Although she was successfully treated for both diseases, a few years later she got sick again, this time with a different strand of TB. Fridah became so ill that she was losing weigh rapidly and couldn’t walk or eat. She needed oxygen. The pain she experienced was near unbearable. Around this time, she was reading about the relationship between TB and HIV, and read that an HIV positive person could contract TB multiple times in a life time.

Although Fridah was given pre-test counselling, and although her doctor knew she was HIV positive, he didn’t reveal her positive status to her. At the time, the medicine was expensive, and he knew Fridah and her family wouldn’t be able to afford treatment.  Fridah got tested anyway, confirming that she was HIV positive, and her C4 count was at a critical low of zero.

I asked Fridah what she would like other HIV positive men and women to know, and her response was that “having HIV is not the end of one’s life. At times I feel like – what happened to me? Why me?  But I don’t entertain those thoughts for too long, because I am privileged to be alive.” When HIV treatment became affordable, Fridah started drug therapy, and has been feeling healthy since.

Fridah feels that her life and HIV status “has a purpose – I use my experience to help out other people”.  Fridah’s first opportunity to help out another person living with HIV was a friend who had recently taken sick leave. She encouraged him and his wife to get tested, and to take their child to get tested, too. They both tested positive. The husband needed treatment right away, and when he received ARV’s, he responded well, and made a quick recovery.

Whenever Fridah would go to the hospital for her regular check-ups, she noticed that there were always more women than men, and asked the pressing question: why are women more vulnerable to HIV?

With Zambia holding one of the worst rankings on the Global Gender Gap Index, women and girls have little to no control over sexual decision-making, and men don’t always want to wear condoms. There is also a lack of family planning, with “many couples continuing to have [many] children without the means to support them. Couples, especially those in marriages – even when both partners are HIV positive – are hesitant to use a condom. It’s very dangerous – you can become re-infected”.

Fridah has seen many newly infected women in her peri-urban community suffer.  Four years ago, she met a lady who died from AIDS without having received any support. Many women, despite their HIV status “have more children to please the husband and the family, instead of taking care of themselves. How many children should there [really] be in an HIV positive household? More sensitization and awareness needs to done in the communities [on this issue].

When I would speak with some of the HIV positive women, most of them were ‘blank’ on the issue, and were very ‘closed’ [to speaking about it].”  That’s when Fridah decided that she wanted to support women who were HIV positive.

“It’s always been my passion to help people living with HIV and AIDS”. This year, Fridah started a new organization, the Yangeni Care Foundation. Since then, she has seen some of the women involved in the support group change – “they light up with the opportunity of working together.” Fridah would like to build the organization so that it can also support children in need of care who have been ‘left behind’ by the AIDS endemic.

If you are fortunate enough to be able to support the development of Fridah’s new initiative, and are happy to do so, please contact her via email at: fchimupeni@yahoo.co.uk, fchimupeni@gmail.com,

or through skype at: fridah26. You can also become a fan of the organization and follow-up on updates on Facebook.

One Response to My Trail-Blazing Friend Fridah