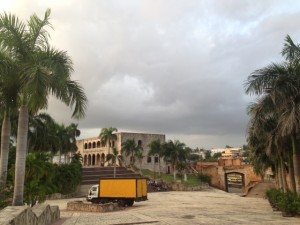 Paparazzi shot of the Columbus family home from afar

Melissa and I have been here for exactly two weeks now! So far, so good.

We’ve finally gotten everything straightened out in our apartment — power? Check! Gas tank for the stove filled? Check! Fully equipped kitchen? Mostly-check! In the past weeks I’ve been spending a lot of time devouring Junot Diaz’s books, which have been really great for learning some Spanish slang and snippets of Dominican history.

We started work almost immediately after we arrived, which has proven a great way to establish a routine and feel more settled, but unfortunately means that the only time to see the city is on the weekends. So far we’ve seen a lot of the neighbourhood we’re living in (La Zona Colonial, which also, we’re told, happens to be the most touristy and most safe area) and explored a few cafés, bars and restaurants. There are also lots of historical sites and cultural sights to see in the neighbourhood that we have easy access to, which I’m really looking forward to checking out to get a better grasp on Dominican history and culture. Many of the oldest buildings in the Americas are in this area, including the oldest church of the “new world” and the Alcázar de Colón, the Columbus family home (mansion!) that looks out onto Plaza España, a picturesque square right by the Ozama river.

After my last post, Melissa and I sat down with our respective supervisors and talked out the specifics of what we’re interested in, the work CVC/COIN is doing and how we can be useful. I am already feeling mega-fortunate to have such a responsive and knowledgeable supervisor in Louise, the technical coordinator. It’s been difficult to map out exactly what my “deliverables” will be over the entire six months (as per our discussions of setting out a work plan in our ICAD orientation) mostly because there are so many branches of the organization in which I would like to involve myself and in which I’d like to grow my skills.  Additionally, the project seems to move pretty quickly and in all different directions, so it’s hard to say what sorts of things may come up over the next months that will catch my interest and to which I can contribute my skills.

A bit about the project:

The CVC/COIN Vulnerabilised Groups Project is a project funded by a Round 9 grant from the Global fund. PANCAP, the Pan Caribbean Partnership against HIV and AIDS, consulted with stakeholders in the region and CVC (Caribbean Vulnerable Communities, based in Jamaica) and COIN (Centro de Orientación e Investigación Integral, based in Santo Domingo) proposed a two-phase project over five years that focuses on working with vulnerable communities — namely: men who have sex with men, sex workers (female, male and transgender), marginalized youth, and drug users (injecting and non-injecting) — in order to foster universal access to services, to reduce HIV transmission in vulnerable populations, to provide better information on the epidemic (amongst other things) and to build capacity within regional NGOs and help them develop programming that can be easily scaled-up by governments in the region.

The first thing both of us were tasked with was reading a painstakingly-researched and highly detailed external evaluation of the first phase of the project (we’ve just entered the second phase), but even with all that background, all this information remains tough to wrap my head around.

My understanding is that in the Caribbean region the HIV prevalence rates are the second-highest in the world, the highest being in Sub-Saharan Africa. Until recently governments in the region have been treating the disease as a generalized epidemic, when serological and behavioural research has shown that in fact that the prevalence rates are much higher in vulnerable populations, yet little has been done to address this more sophisticated understanding of the epidemic.

In Phase 2, the Caribbean Vulnerabilised Communities project will work in the DR, Haiti, Trinidad and Tobago, Jamaica, Guyana and Suriname.

I could go on and on about the details of the project, but this was all to say that currently I’m working on laying out a series of publications documenting promising practices (“success” stories from regional NGO projects that CVC/COIN funded) to use for advocating government decision-makers. I’ve also been tasked with working on a social media strategy document, and researching and writing a report on the role of social media to achieve the goals of the project and, more broadly, the role of social media in advocacy.

As an example of how social media is being used in the region as an advocacy tool, check out this video from a CVC/COIN-funded project, We Are Jamaicans, created by J-FLAG (Jamaican Lesbians, All-sexuals and Gays).

That’s more or less what’s been going on on the job front — I’ll save the (mostly) trials and (small!) tribulations of trying to learn a new language for another time. If you want to stay tuned re: these trials/tribs, you can follow me on twitter here.

This entry was posted in IYIP 2013-2014 and tagged COIN, CVC, DR, social media. Bookmark the permalink.