Coming out week and first projects

I have been in the lovely country of Suriname for just over 3 weeks now. Feels like I have been here months!! I’m all settled in and starting to make some new connections with some local friends and with some dutch tourists who are here on school internships for 5 months.

I have had the opportunity to do lots of different activities so far. For proposals, I made revisions to a grant for a global fund grant proposal. Finalizing this proposal involved having a meeting with a representative from the Country Coordinating Mechanism (CCM). I was pretty intimidated, especially because it was my first week at work, but it turns out it couldn’t have been a better opportunity! Mylene led me through the key items that the Global Fund panel is looking for in the grant proposals they review and even shared some documents with me that have been extremely helpful thus far.

I have also been lucky enough to be taken along to 2 weekend outreach events that have shown me how the educators work. I have not done any of the education part of the outreach, since I know almost nothing in the most common languages here. The official language of Suriname is Dutch which is taught in schools, however everyone on the streets speaks Sranan Tongo, meaning “Surinamean tongue” or Surinamese. Later in school they learn English, so with most people I am able to get by, however some people know very little English (depending on their level of schooling and their occupation).

The first outreach event was in Nickerie, a province on the western coast of Suriname. This was the first time I saw the educators, Vivian and Steven, in action. The campaign involved having participants read a sticker in Sranan Togo that says “Prakseri Tek Leri.” This means think before you act. Then the educator asks what the participant thinks this means with regards to HIV. Those who participate get prizes (pen, water bottle, flashlight or sticker) and – of course – condoms! I was the photographer, handed out condoms, and held the prizes while the educators were busy doing their pitch. 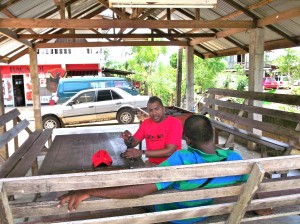 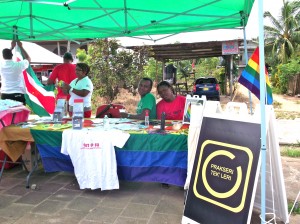 Steven and Vivian, the educators, showing off the lovely booth they set up

This week (October 5-11th) is coming out week here in Suriname! There was a big info day on Saturday that involved the LGBT platform. LGBT platform is an umbrella with several other branches of organizations who extend under them to work with the LGBT community. SMU brought some materials to the booth which was at a bus depot, and the educators worked from the booth and also wandered around the streets, and even onto full buses of people waiting in the depot to do their outreach.

Kenneth, my mentor, is away the next few days at a conference for work in Guatemala. So I am happy to help out with the booth at the coming out parade while he’s getting more work done for the organization!  I will be doing some of the coordinating of our booth and the activities. Coordinator doesn’t mean much when the educators are so good at what they do, but I will write down the numbers of participants, make sure the booth is well set up and maintained throughout the hours we are there, and make sure that there is lots of outreach going on.

I have been really lucky that there is another Resource Mobilization Assistant on an internship this year. Dara, who is farther along in her internship, has been able to give some really good insight and share some resources. So although I’m alone in Suriname I feel like I have a  partner to help me out. 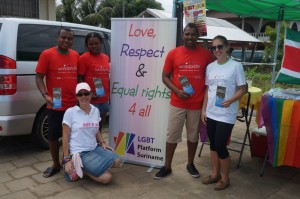 It seems where ever you travel you can’t escape references back to Canada: the shirts and the info pamphlets that we have were sent from Toronto World Pride. So cool!