The last month has been filled with new developments and exciting changes. I am now living at a guesthouse where I have met lots of new interns from the Netherlands. My first month here was not very social and although work was going well, I felt like I was missing something. Now, I feel very settled in and comfortable here. I and have been getting some Dutch lessons from my new friends, which has been fun (and frustrating at times).

A refresher: I am here as a Resource Mobilization Assistant, trying to get more resources for Suriname Men United (SMU) to be able to execute current projects and new initiatives. 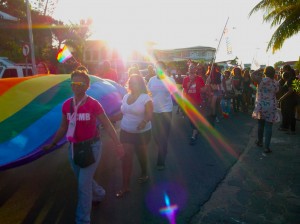 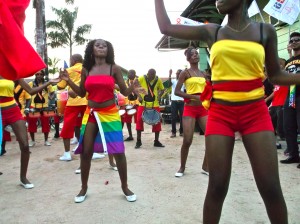 The band and the dancers at the coming out parade

A few weeks ago I helped out with the coming out parade, which was really fun! There were a lot more people participating than I thought there would be, and there were even people who came from French Guiana. The parade was kicked off by a marching band with great dancers, and then a massive flag was held by the crowd that followed. The educators handed out hundreds of condoms and did lots of demos. There was lots of sharing of resources, networking, and education. The celebrations went on into the evening, and was a big success!!

Kenneth, the director of SMU, has big ideas for a lot of new initiatives. Similar to Dara’s situation as resource mobilization in Antigua, there is no meeting space for MSM to congregate, discuss issues, and advocate for themselves. Therefore Kenneth wants to get some funding to get an office and meeting space, but also to start a Voluntary Counseling and Testing (VCT) site. This is a big undertaking, so to build up the budget and make a plan and timeline for this project I have been visiting other VCTs in the area to see how they started and what their costs are. 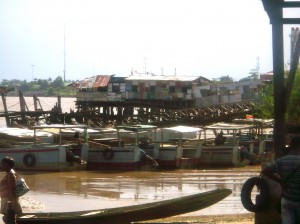 On my walk to work through the market area

Another project is a newsletter. SMU had a quarterly newsletter from 2009-2011 which it distributed to schools, NGOs, Community Based Organizations (CBOs), and centers who work for MSM health. It was very well received, and in the past few months schools have been asking for it again, so I am submitting some proposals for that. Hopefully they are successful!

To research the organizations to send grants to, I found an amazing link on the AmfAR site. It has lots of organizations and is pretty up to date. http://www.amfar.org/uploadedFiles/_amfarorg/Around_the_World/MSMToolkit.pdf

Kenneth is also interested in getting into some legal discussions about partnership rights for same-sex couples, having LGBT issues in school curriculums, and many more initiatives that sound amazing! He is a really ambitious man with tons of ideas and isn’t afraid to break the mould or speak out for MSM rights.

The grant application for Global Fund money that I edited and made some changes to in my second week of work has been approved! The plan for this project is to make some 30 second commercials involving different members of the LGBT community, government workers, and allies to speak about human rights. I have been helping with some background work and it looks like they are going to be very powerful. They will be done in the style of these “We are Jamaicans” videos. http://www.youtube.com/watch?v=O9iNYKqttc4. I will post links to them when they are released, around mid-December. The second part of this grant is to have a training session for transgender persons and then help them to create their own organization. Amazing!

That’s all for everything related to Suriname Men United, but I will also be doing some activities for World AIDS Day for ICAD. ICAD requested the projects, but is giving us a lot of creative leeway to come up with our own ideas and inspiration, which is awesome! I am going to run with an idea for a video, and I hope it turns out okay. 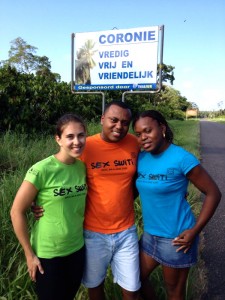 This weekend I will be going with the educators to some outreach events at a nightclub called Night Fever. They’re always fun to hang out with, and I love watching them in their work mode! They are super confident and really hard workers, so there’s never a dull moment when they’re around. And when there is a lull they usually teach me words in Sranan Tongo and laugh at my struggles to pronounce them.

I’m looking forward to the next few weeks when I will be putting together more proposals and hoping that I will get some good responses.

Enjoy the snow in Canada! I’m missing it a little bit in this 45 degree weather (http://www.theweathernetwork.com/weather/suriname/paramaribo/paramaribo)