Posted on December 3, 2013 by Avneet Dhillon

How is it already December?! I can’t believe I only have two more months left in Belize – this internship has been flying by. I keep meaning to update this blog more regularly, but it’s already been over a month since my last post (whoops!). November’s been a busy month at BFLA, and I didn’t realize just how busy the week of World AIDS Day was going to be. I’m currently writing this post in between health fairs and youth group activities, which have continued from last week.

Last time I mentioned that BIGG Chatz, the television and radio show run by BFLA and its youth arm – the Youth Advocacy Movement (YAM)– had begun its sixth season. We now only have one episode left in this 8-episode season– the penultimate show aired on Saturday and the finale is on December 7th. So far we’ve covered teen pregnancy, HIV/AIDS, safer sex options for teens, and healthy relationships, and hosted guests from the Belize Red Cross, Youth for the Future Belize, and PASMO Belize. I’m currently working on a collection of behind-the-scenes footage that I shot while at the studio, which will air during the finale next week. I will post the link in my next blog post. While this season’s episodes are not yet online, I’ve managed to upload the entire first season of the show on the YouTube channel I set up for BFLA when I first started here. 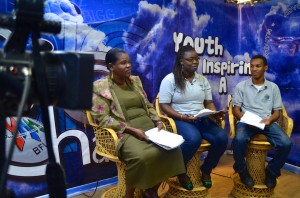 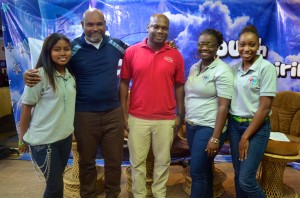 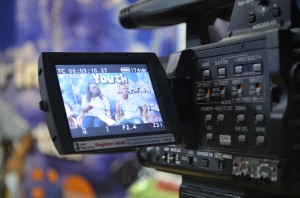 Co-hosts Hydie Golanche and Durman Dawson during a commercial break 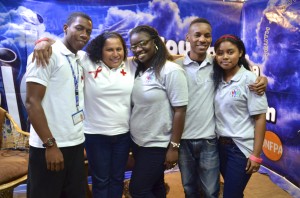 I’ve also been experimenting with live-tweeting certain episodes on the Twitter page I set up for BFLA. Not many Belizeans seem to use Twitter, although Facebook is ubiquitous here. Similar posts about BIGG Chatz are made to both Twitter and YAM Belize’s Facebook page. The show’s finale is intended to be a celebratory episode and it will be Christmas-themed. I’m also putting together a video all about YAM that will be played at the end of the episode. The finale is going to incorporate a YouTube video called “12 STIs of Christmas” that was made by the Department of Health in the UK.

Before the last episode next Saturday, I’ll be coming up with twelve sexual and reproductive health tips that will be featured throughout the show, as well as questions for the viewers because we have twelve sponsored prizes to give away during the finale. The different tips will cover the various issues we’ve covered throughout the season. I’ve really enjoyed being part of the production team for the show and meeting the different guests. The discussions have been really informative and it’s great that we can include feedback and questions from our viewers into the show. The Christmas episode should be a great way to end the season and thank all of our viewers and supporters of BFLA and YAM.

This year’s peer education program came to an end in November. BFLA trains peer educators at local schools in various sexual and reproductive health issues. Entry to the program is very competitive (only 6% of those who applied to take part in the program at Edward P. Yorke high school in Belize City were accepted). Students must maintain a high grade point average, cannot be failing any classes, and have to pass the post-test with at least 70% in order to become a certified Peer Educator. I was able to attend the Peer Educator graduation ceremony at E.P. Yorke last Thursday, where students were awarded with their certificates and Ms. Joan Burke, Executive Director of BFLA, also made a speech. Many members of the Youth Advocacy Movement are graduates of this program. In her speech to the students and parents assembled at the ceremony, Ms. Burke spoke about the impact of the Peer Ed program and the difference it can make it to these students’ futures. She noted various statistics from BFLA clinics throughout Belize – including one from her recent visit to the Stann Creek district, where she was told by the clinic nurse in one of the communities there that “33% of the mothers who visited her clinic – pregnant women or girls – from January to September, were between the ages of 10 and 14.” She told the students that she didn’t want any of them, or any young person in Belize, to be part of such a statistic. Ensuring that young people get the right information, through experiences like the Peer Education program, is one way of changing these statistics. 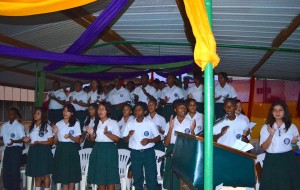 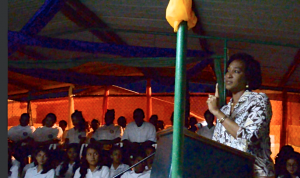 Now that the peer education sessions are over, Ms. Melanie Montero – Director of Education and Programmes at BFLA – has tasked myself, the Youth Officer (Ms. Anna Carrillo), and the Outreach Officer (Maki Akiyama) with updating the manual for the program, as well as some of the teaching materials. We’re trying to find ways to make the material more accessible and concise based on what we’ve experienced with this year’s students. As Ms. Montero says, BFLA on its own unfortunately has a limited reach, and will not be able to get through to every young person in Belize, but it is important that the ones we do reach are getting the right message and all the resources, information, etc. that they need to make the best choices.

I put together a video presentation about Belize that was submitted to ICAD last week as part of the “Dispatches from the Field” blog series for World AIDS Day.  It covers how World AIDS Day has been celebrated in the past and some events that have occurred this year – you can check out the post or watch the video here. That video did not include the events that have been taking place this past week, which BFLA has been attending. I’ve been visiting a number of different health fairs with BFLA’s Youth Officer and they’ve all been planned around World AIDS Day. One of the fairs was hosted by the Belize Defense Force (BDF) at their base in Ladyville. There was an HIV-testing area available where you received your results within twenty minutes and BDF officers and members of the community all came by to get tested. BFLA shared a space with the Belize Red Cross and we were visited by both BDF officers and local elementary school students, who dropped by for some education on sexual and reproductive health. 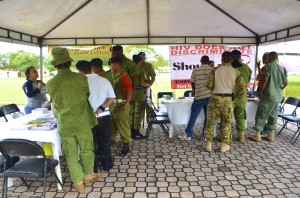 Inside Belize Red Cross and BFLA’s area of the BDS Health Fair in Ladyville, Belize 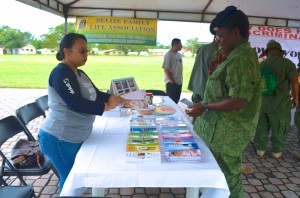 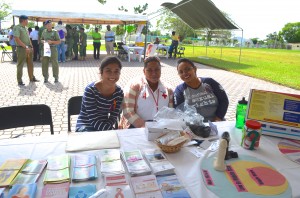 Me, Ms. Tina Gill from Belize Red Cross, and Ms. Anna Carrillo at BFLA’s table during the health fair 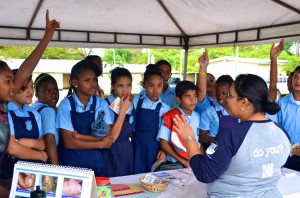 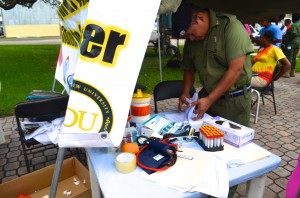 Later on in the week, the local police department held a health fair here in Belize City. Also in honour of World AIDS Day, BFLA’s Youth Officer spoke to Anglican Cathedral College (ACC) students about HIV/AIDS at St. John’s Cathedral in Belize City. I came along to assist and take photos and videos of her talk with the students. One part of Ms. Anna’s talk covered the various myths surrounding HIV, as well as common myths about sexual and reproductive health in general. Afterwards, one of the school’s staff members commended us and said that a lot of the myths we mentioned are still very prevalent today. He told us that in Jamaica, where he is originally from, the myth that a girl cannot be impregnated the first time she has sex is widely believed. It’s satisfying to see members of the community talking about these issues and working to rectify the various misconceptions, stigmas, and unhealthy behaviour present in Belize. 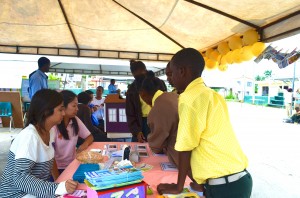 BFLA Outreach Officer, Maki Akiyama, and I at a health fair in Belize City hosted by the Police Department – students are attempting to arrange the steps for using a condom in the correct order 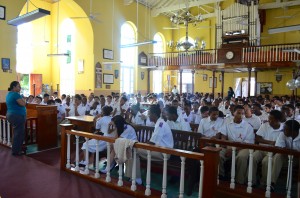 That’s most of what I’ve been up to since my last post. The office is definitely getting into the Christmas spirit – we decorated the clinic waiting area and the youth center last week. 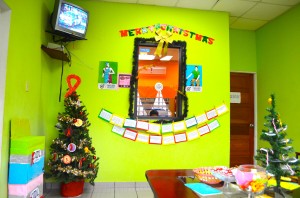 BIGG Chatz records the live portion of the show on Saturdays, so part of my weekends has been spent at the studio for the past seven weeks. However, I’ve still managed to explore more of Belize. Brian and I visited the Belize Zoo and the Altun Ha Mayan Ruins, and most recently I went cave tubing with my co-worker Maki at the Nohoch Che’en Caves Branch Archeological Reserve. There’s definitely no shortage of adventure in Belize! 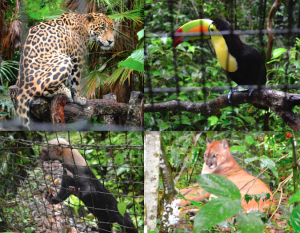 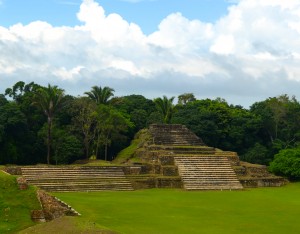 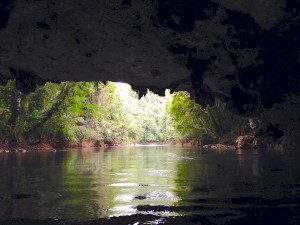