Posted on December 10, 2013 by Michaela Cavanagh

Here is an article I wrote for an English-speaking news website here in Santo Domingo. Check out the full transcript below! It was a really cool conference and it was inspiring to be around people who were so knowledgeable, committed, and impassioned about such a relevant and problematic issue. 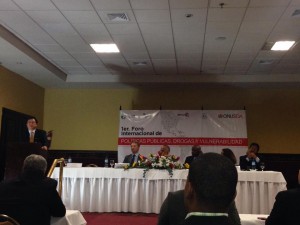 With an aim of analyzing the legal and social context in which drug use occurs, the forum approached the issue of drug use from the intersecting perspectives of human rights, public health and its implications on the development of successful strategies for addressing the needs of drug users through public policy.

Featuring panels covering topics diverse as “HIV and co-morbidities,” “Deportees: realities versus responses,” and “Vulnerability and structural violence,” the forum attempted to take first steps towards breaking down stigma towards drug users and recognizing the underlying problems that may cause drug addiction.

Sanho Tree, director of drug policy at the Institute for Policy Studies in Washington, D.C., gave the keynote address on shifting paradigms in drug policy, asserting that rather than treating drug use as a criminal issue, policy-makers and legislators consider the underlying problems facing vulnerable populations, which are often more elusive and more complex to treat, rather than a band-aid solution of being “tough on drugs.”

Other speakers included Bethania Betances, acting director of ONUSIDA in the Dominican Republic, Peter Hakim, president emeritus of the Inter-American Dialogue, Dr. Vargas Vidot, a leader in the development of harm reduction strategies in Puerto Rico, and Marcus Day, a veteran researcher and director or the Research Institute of Alcohol and Drugs in the Caribbean, from St. Lucia. The technical discussions were punctuated by an impassioned speech from Federico Mercado, the president of FUNDOREDA and a former drug user.

An excellent first step in the process to destigmatize drug use in the Dominican Republic, where zero tolerance is the current policy in place, the consensus amongst the participants was that, as Francis Taylor, one of the organizers, said in his closing remarks, “our work begins here.”