Red Ribbons, Flowering over the Hearts of Women in Tanzania

Sunday, December 1, 2013 marked the 25th year of remembrance and action on the worldwide pandemic of HIV/AIDS. According to UNAIDS, since AIDS was first identified in the 1980s, it is estimated to have killed 30 million people around the world; there are currently approximately 34 million people living with HIV around the world, many of them in sub-Saharan Africa.

HIV/AIDS is framed differently here in Tanzania than it is in Canada: for all that stigma continues, the prevalence of HIV means that people are aware of the disease in ways that they are not in Canada. While in Canada, women are becoming a larger percentage of the people living with HIV, in sub-Saharan Africa women have been the majority from almost the beginning. HIV in Tanzania is primarily spread through heterosexual contact, so there is no pretence that infection is something that only happens to certain people who engage in certain behaviours, in the way that there still is in Canada. Red ribbons flower on street signs, as graffiti on walls, on the t-shirts of women and men walking through the busy streets of Moshi, the town in which I live.

Moshi is the main city of Kilimanjaro Region, home to the mountain and associated tourism, and many agricultural communities growing coffee, bananas and maize. Mount Kilimanjaro dominates the horizon when it’s visible and is hidden behind a wall of clouds so completely at other times that you could forget it is there. It’s a beautiful place. 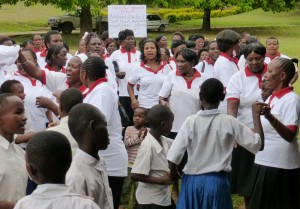 The social problems that lurk beneath the beautiful scenery and pleasant greetings from strangers are the same ones found everywhere: poverty, youth unemployment, substance abuse, domestic violence. Social problems are also treated differently here; whenever possible, problems are dealt with within the family, or an extended circle of friends. Though considerable work has been done by the Tanzanian government and local groups, stigma around HIV/AIDS persists; further, stigma also acts to keep people from talking about sexual health and sexuality. Like many places in sub-Saharan Africa, people are extremely socially conservative: sex is rarely talked about with young people, even from a health and safety perspective, and public displays of affection between men and women are heavily frowned on. Same sex displays of affection are considered more acceptable, primarily because homosexuality is so taboo that such gestures are automatically read as platonic.

Sexually repressive cultures do not change sexual behaviour, they just drive it underground, where victims of sexual and domestic violence, usually women, have greater difficulty accessing support and services. Further, because all expressions of sexuality are to some extent taboo, the differentiation between normal sexuality and sexual exploitation is muted[1]. While in a more permissive culture an unhappy couple could simply separate, with social and religious pressure to maintain a marriage, people are more likely to be unfaithful, thus exposing their partners and themselves to greater risk. While women are no more innately monogamous than men, the potential consequences of female infidelity are far greater, especially in the context of the most recent UNAIDS study, which found that 40-50% of women surveyed in Tanzania had experienced intimate partner violence in the past year[2].

Further, gendered norms promote and reinforce sexual risk-taking as a specifically male activity; these same norms force girls and young women into the role of gatekeepers, whose job it is to say refuse sexual advances and maintain their “good girl” status. Conditioned in this way, girls and young women are not given or encouraged to develop secondary strategies for A) if they want to say yes, or B) feel they are not in a position to say no. Consequently, young women (aged 15-24) are less likely than their male peers to be knowledgeable about HIV and more likely to engage in higher-risk sexual activity without a condom[3]. It’s also notable that between 2002 and 2011 there was a markedly greater uptake of both comprehensive HIV knowledge and condom use amongst young men relative to their female peers.

This is the context in which I am working. While there was a World AIDS Day event in Moshi town, I travelled with a colleague to the small town of Kibosho, population 20,000, to attend the demonstration there. Tanzania is still a largely agrarian economy, and in 2012, according to the census, 70% of the population lived outside of urban centres[4]. There are eleven volunteer groups in Kibosho, supporting orphans and vulnerable children (OVCs), people living with HIV (PLHIVs) and the elderly caretakers of both groups. The volunteer groups, which also include peer educators and home-based caregivers (HBCs) are collectively known as NDEKIRA (save those who are in need, in Swahili). For the two days prior to World AIDS Day, these dedicated women, and they are almost exclusively women, have been conducting public outreach on health education at the major meeting point of the town.

NDEKIRA, along with PLHIVs and OVCs, marched from a site that was previously used to conduct voluntary counseling and testing (VCT) services to Kibosho Parish Hall, singing, carrying posters with information on HIV and making sure that their voices were heard throughout the town, so that the full impact of HIV on Kibosho could not be ignored or forgotten.

The procession was greeted at their destination by local politicians, representatives of the medical staff of Kibosho hospital and other community representatives. With the exception of the hospital staff, the guests were primarily men. The guest of honour, a man born in Kibosho, but now a successful politician in Dar Es Salaam, said that he expected such demonstrations in major cities, but not in such a village. He was clearly impressed by the community mobilization, as were all of the guests, who made speeches praising the efforts of these women, and reminding them of their importance to the community. What went unspoken was that, while half of the community was mobilized quite effectively, the other half was only represented at the table for guests. They only men present were speakers and one man living with HIV; there was not a single male volunteer or even member of the community who came by to commemorate the day.

As always, it’s easy enough to identify a service gap. But filling that gap is considerably more challenging. What I saw in Kibosho on Sunday was half the solution to a global pandemic – and it was amazing, inspiring, genuinely moving. But without the other half, without men buying in and talking about HIV/AIDS and realizing that they are not immune simply because they don’t want to be infected, in another 25 years we will still be marking this day.

Latest posts by kate (see all)

This entry was posted in World AIDS Day 2013. Bookmark the permalink.