WAR’s Activities During 16 Days of Activism

Just thought I would share the notes and summaries I composed for WAR about their activities during 16 days of Activism in Nov/Dec. Also,  if you feel so inclined you can follow WAR’s Facebook page. We update the page weekly with links and posts on gender based violence and gender equality and the page will keep you up to date with WAR’s ongoing outreach activities and projects, the page is called: Women Against Rape, Antigua and Barbuda.

This meeting will bring together representatives from media houses and organizations that promote gender equality in Antigua and Barbuda. This meeting aims to: (1) increase stakeholder awareness and recognition of GBV and gender inequality in the media, (2) discuss the consequences of how GBV is represented in the media and, (3) explore the possible ways that media can aid in promoting gender equality and eliminating GBV.

This meeting is part of an ongoing dialogue WAR has been having with media house bodies. There have been quite a few articles and a blog post I found published on the topic:

Points from the Discussion

>This meeting was covered in the Antigua Observer: http://www.antiguaobserver.com/push-for-broadcast-policy-is-a-push-for-self-evaluation-says-proposer/

December 5th 2013: Symposium on Gender Inequality and Gender Based Violence in Antigua. 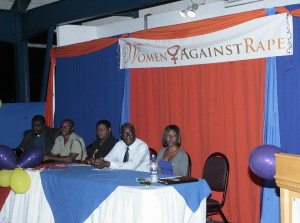 This symposium encouraged thoughtful and collaborative discussions on the issue of gender‐based violence in Antigua and Barbuda. Panelists were asked to speak about very basic questions followed by a  question/answer and discussion:

Four re-current themes brought up by the panelists speeches and in the discussion included:

>Redefining self and spaces: Prevalent expectations of women and men need to be redefined in Antigua and Barbuda, we can start by looking at our homes and relationships we have with our families to influence larger social change. 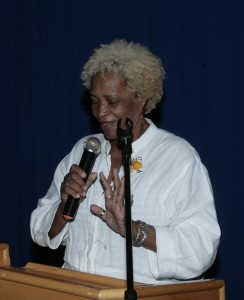 > Plurality of sexuality: There is apparent need to recognize the sexuality of peoples with disabilities and LGBT populations and the impact of gender inequality and gender based violence on these populations.

> Collective Responsibility: We need to identify and investigate how patriarchy affects everyone and emphasize how gender based violence affects both men and women. 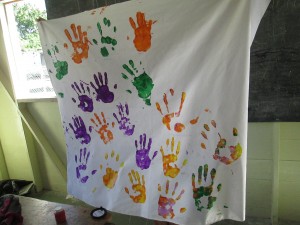 Outreach activity at a local school near Saint John’s for a brief address on gender equality, preceding discussion, and mural production. The symbolic hand which has been used by many organizations has its origin in Amerindian history was printed in diverse colours on a white background and signed individually to encourage students to think about gender equality and how it impacts their and their peers lives.