As the other interns are at home, settling back into a colder, faster-paced life, I am still in Suriname on the last few weeks of my internship.

January was a bit slow – I was hopeful that some of the e-mails I had sent out to gay news organizations and gay magazines in the US and the Netherlands would want to sponsor SMU’s newsletter, however their promise to respond in 24-48 hours is apparently conditional, and does not apply if you are asking for donations.

The pace has picked up in February. Suriname Men United launched their Facebook and is going to undergo some big changes to their website. SMU will also put out a Wikipedia page, which has been a much bigger undertaking than you would think. With Wikipedia, everything is supposed to have a source to back it up. The research and compiling all the history and reports of SMU, especially finding old newspaper articles in Dutch, has been challenging at times. However, this wealth of information online will be a great tool for people doing research, investing, or wanting to learn more about SMU so I am happy to be undertaking the project! Definitely a good task for my role as Resource Mobilization Assistant. 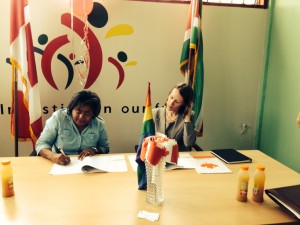 Representatives from the LGBT Platform of Suriname signing a Human Rights Grant, being handed over by the Canadian Ambassador

I had another exciting day last week when Kenneth gave me the opportunity to attend the signing over of a grant to the LGBT platform from the Canadian High Commission in Guyana. The grant is for doing some workshops  on human rights and other human rights activities. The Canadian Ambassador, Dr. Nicole Giles, was an amazing woman – she had lots of questions to ask the Platform and was very interested in how this project could move forward human rights. She also talked of her personal experiences; LGBT rights in Canada 20 years ago were a hard fight, now her son celebrates gay pride week at the daycare and all the little tots walk around with pride flags – amazing! I had a huge smile on my face imagining this. She thinks there is a future not so far away in Suriname, and the Caribbean, where openness and acceptance will bring LGBT persons less stigma and discrimination. After the signing and the questions, I got a chance to speak with her. Turns out she is also from Ottawa (the Glebe) and went to Queen’s for her undergrad! I told her I had worked in Guyana before for a student-run development project, and she asked “Which one? QPID? QHO?”. I told her that it was QHO and I realized that we live in an extremely small world. 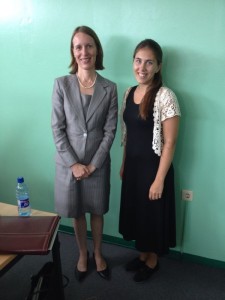 Me and Dr. Nicole Giles after the meeting between the LGBT platform and the representatives from the Canadian High Commission in Guyana

The last 18 days here now will be tying up loose ends – ensuring everything gets on the website, transitioning all the documents over to Kenneth, and trying to send out the finished grant proposals to more organizations. I can’t believe it’s coming to a close.